You are here: Home / DIY/Decor / Kitchen Remodel: During

Today I’m sharing some of photos from during my kitchen remodel from my One Room Challenge from Calling It Home! To get an idea of how it originally looked, check out the before images and information here.

One of the major changes we made was to add a custom hood over the cook top. Even though the home was originally custom built, the previous owners had the microwave installed over the stove, which is one of the biggest things that can make a house look a little more generic. In a previous home I had a custom stove top that we just absolutely loved, so I had a replica built by our cabinet maker. 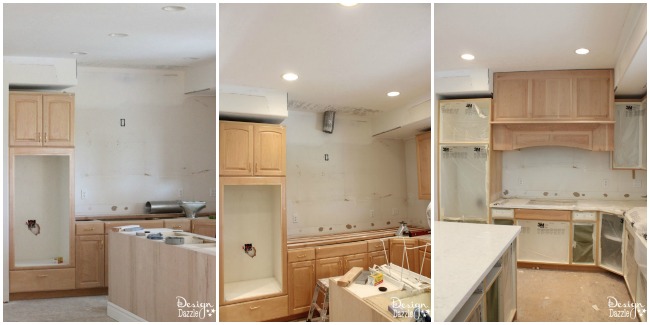 All the custom pieces were made by the cabinet maker, and then he brought them over when it was time to install.

In order to get the custom piece to fit, the wall had to be cut into the interior soffit (top left photo), and we had to work with reinstalling the insulation – but it was, without a doubt, 100% worth it. Here’s a look at some of the work that went into getting the hood in place and on its way to being done:

We put in a brand-new farmhouse sink and this faucet. I love how the faucet looks, but have to say I should’ve  listened to the reviews. They weren’t great, but I thought I might get lucky with it. It is beautiful – but it leaks! 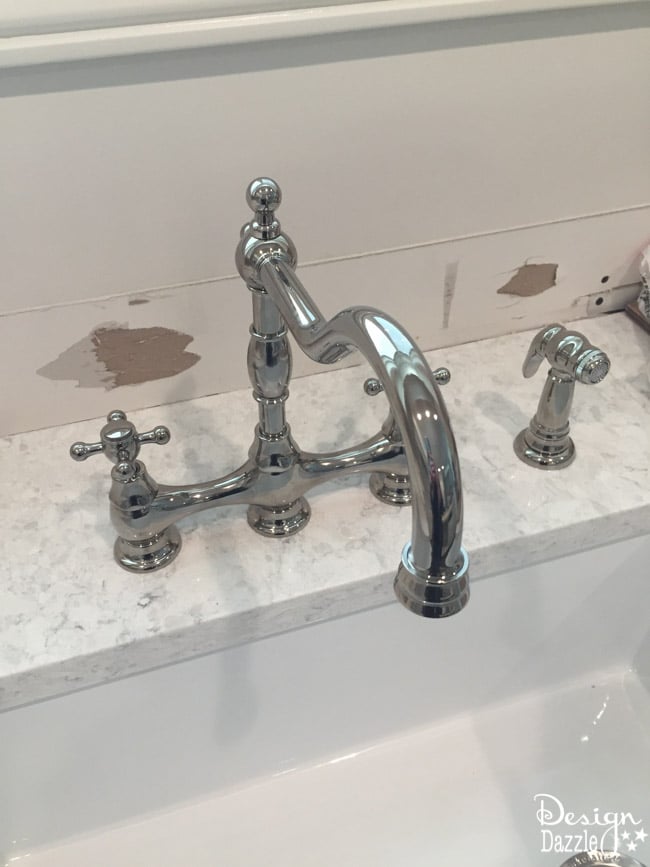 Another upgrade we made was to install a white subway tile back splash. This was actually one of the last things that went in, since it couldn’t be installed until all the counter tops were done. I’ll make sure to include more details about the process of choosing and installing the counter tops in the next post of this series!

Beside the hood, the other major change we made to the kitchen is the island! I can’t wait to share all the little details and surprises it has later on! The big changes here came from changing the layout, removing the step, and removing the hanging chairs. We used the existing island, but just rearranged the cabinets for the best use. 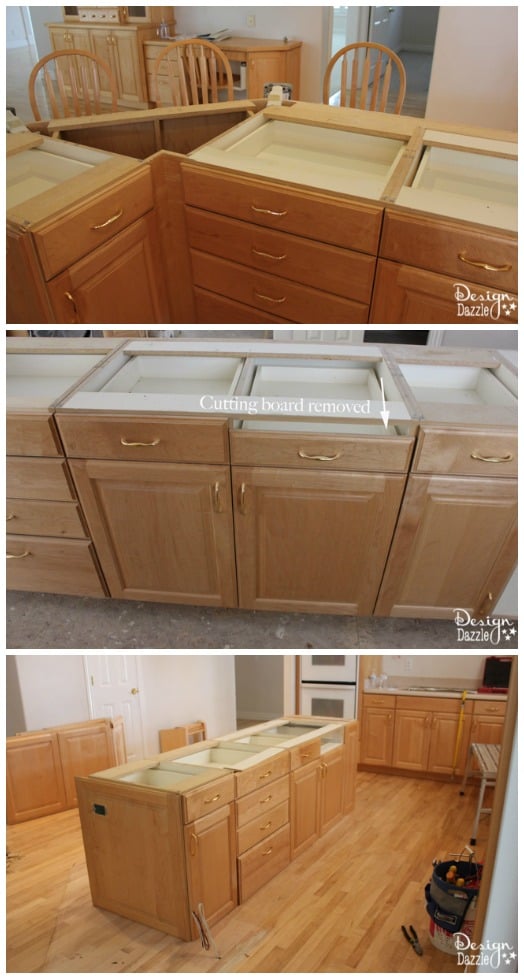 We were able to use almost all of the original cabinetry in the new island layout. We had our cabinet maker rearrange some of it and build some new sections and doors to get it just right.

I’m not a fan of using the built in cutting board that a lot of islands come with, so I wanted that removed. In order to get rid of the gap it left, the cabinet make just had to make a new drawer front. Super easy, but it made all the difference!

I also decided that I didn’t want the bookshelf part of the island to be close to the stove, so I just had it moved to the other side, and it looks great!

The final island is amazing, but here are some pictures of the process it took to get there: 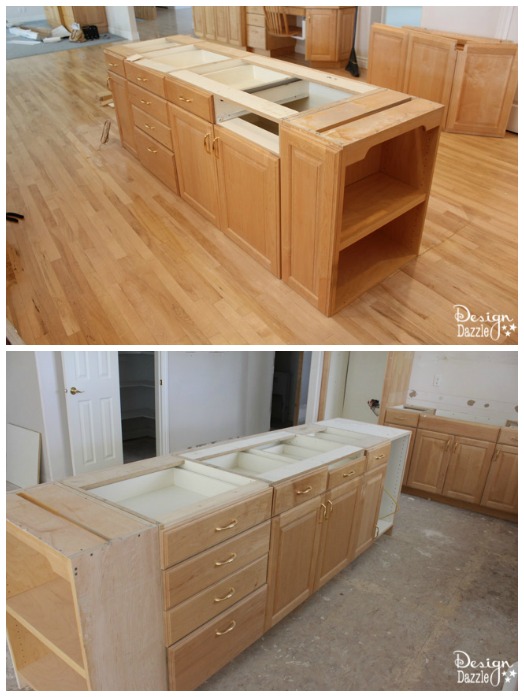 TIP: There were a lot of parts of the cabinets that we didn’t need anymore, and I decided to put everything I didn’t want up on some online classifieds. Everything was gone super quickly, and that way I didn’t have to worry about having all these extra pieces hanging around. This way, everything is reused and doesn’t have to be taken to the dump!
Here are a few other shots of the kitchen as a whole during the remodel process:

For all the cabinet doors, we set up a “spray room” in the basement where the painters could take everything and spray them in there. It reduced the mess and made clean up really easy!

I’m having so much fun sharing this process with you! Be sure to stick around for the finished kitchen reveal and all the details!